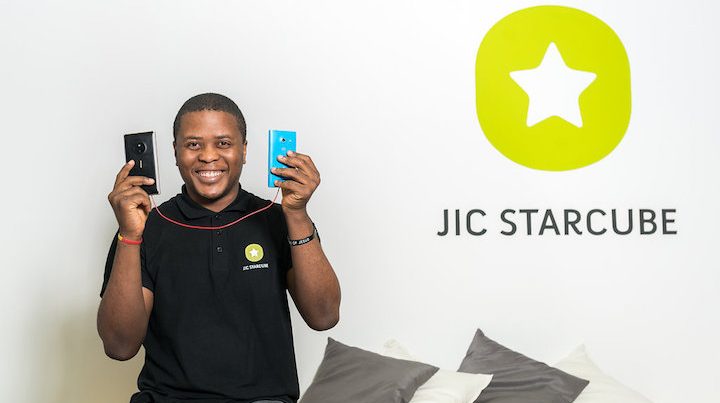 The winner of the Czech acceleator JIC STARCUBE 2015 is Cameroonian alternative for BlueTooth called Feem. The second place belongs to Ukrainian parking app Tap4Parking. The third best project according to jury is Esec Solutions protecting the webpages from hacking. Nine startups were introduced to the public during the show at the Rotunda in Brno Exhibition Centre.

Feem, a project of Fritz Ekwoge Ekwoge form Cameroon, can quickly and securely transfer files between different devices. It´s faster than Bluetooth and it doesn´t need the internet. „He simply gave the best pitch. He was interesting, he had a compelling reason why to listen to him, he made a good case for it, he did everything right to persuade us that he should get the next meeting,“ sais jury member and computer scientist Tamar Newberger. 800 thousand people already uses Feem. “Most of our users are form Europe, so I joined JIC STARCUBe to find more about european market. We expect Feem to be the most popular way of transfering files locally in two years,” plans Fritz Ekwoge Ekwoge. There were already two successful startups from this talented Cameroonian. After the accelerator he intends to move to Brno.

The second is the project Tap4Parking – an app that provides finding, booking and paying for a parking spot for less than 1 minute. „Our interactive parking map provides data on free parking lots in real time that is recorded by smart cameras of our own production,“ sais CEO of the company Igor Shapataiev and adds that with his colleagues they are exploring EU marketet now and with help of JIC STARCUBE we can make it more successful. „Our ssolution is already available in Ukraine and Poland and will be launched in the Czech republic in the nearest months,“ continues the colleague of Igor and the only lady in this run of JIC STARCUBE Anna Balatska.

“We were quite impressed with the potential Tap4Parking demonstrated and the various business models it supports,” said Vaclav Muchna, CEO & Co-founder, Y Soft Corp. “We think the killer app is that a user can identify the parking spaces in advance and book them as needed. We hope the Y Soft award will give Tap4Parking the additional financial resources they need to continue pursuing their vision and continue to work on solidifying their value proposition.” Muchna´s company once started in JIC, this year Y Soft became the gold partner of the accelerator. “We are excited to be back at the JIC StarCube event and to be one of the judges. For me personally, it’s like coming full circle. Twelve years ago, Y Soft started as one of the JIC startups,” continued Vaclav Muchna.

Third best startup according to the jury was estonian project. Oliver Sild a Mart Laud created protection software for websites webARX. Its´s a multi-platform security suit with live protection for commercial websites, built on Content Management Systems, to keep them safe from mass-hacking. The system automatically updates, patches and analyzes the website, to make sure it remains secure and safe. „To sum it up webARX is like an antivirus for websites. Within two years we want to set a new standard for web developments,“ plans Oliver Sild.

The other teams that were introduced during the JIC STARCUBE Show:

Two brothers from Azerbaijan Maksim a Tamleykha Piriyevovi came out with Dronee. Like iPhone and App Store, they are making Drone and Application platform to create drone application eco-systém.

Jiří Ettler protects health via Pillmo, an application which helps users organize health issues – it times the proper dosage of drugs, keeps an eye on their mutual contraindications and reminds people of preventive examination.

JIC STARCUBE has focused for the first time on projects of internet of things and ICT security. The current run attracted the biggest number of foreign projects so far.